How to layer guitar parts? 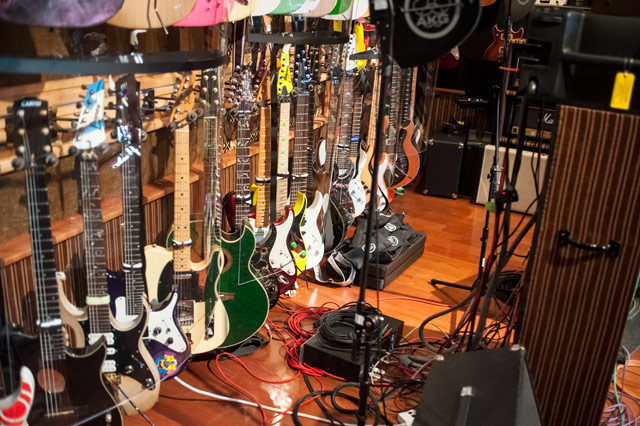 As guitar players, we have all recorded sweet solos and groovy riffs that sound amazing –  just to have the mixing engineer/producers scrap them in the final mix!

In this article I want to share only my approach to doing it, it’s not a blueprint of how to do it not it means that my way Is better than yours.  I will also share a list of guitar players I think are masters of layering guitar tracks.

For the sake of adding some structure to this article, I will divide guitar layering into 2 different but very connected Areas – Composing in the musical aspect and composing in the sonic aspects.

In the words of Tim Pierce, one of the greatest session guitarists of all time

In the sonic spectrum think of it as in this example.

If you are playing guitar on an electronic or modern pop song – the low mid frequencies are usually filled with synths and synth bass and the Low is usually full of more modern sound too.

That leaves you with your small space in the higher minds and also high frequencies – so this is why you hear those clean twangy clean guitar fills are sometimes (hopefully) a proper rhythm clean guitar that doesn’t have lows or low minds to it.

If for example, you are in a more rock situation you can divide the song sonically in a drive rhythm guitar double tracked that has those minds and for example and octave guitar fill in the chorus that is playing along with the power chords – but does not have the low end and minds of the rhythm guitars.

Of course, an engineer will later EQ the tracks but it’s highly likely they will be scrapped if not recorded properly.

Speaking on the composing side of the guitar layering process stick (or not) with this rule of thumb I personally use:

“Do what serve the song and serve musical ideas – not just lick and riffs!”

What we learned from The Edge of U2 during this last 30+ years is that your tone can dictate you’re playing! Jimi page once called him a sonic Innovator for his contribution to all modern age guitars.

Some of my personal advice would be:

These are only a few. There are a ton of other stuff you can use and probably way better sites where you can learn from.

How to pan guitar tracks, create width and space?

Panning is what separates the boys from the men in the guitar layering/mixing world! There are no strict rules about it, but I’ll share some tips I found to help me to decide.

Remember that different genres are more guitar-centered, so probably there is much more guitar panning being done in metal or prig than in modem pop.

“don’t think of double-tracking as a way “it should” be done, because it’s not the only way – see it as a creative choice rather than a necessity to create a big guitar tone. Double tracking can easily help you make a guitar sound huge, but it can just as well turn into a mess if the performance is not solid, or if there are other issues (such as inconsistent tuning between takes)”

Personally, I prefer to double-track rock rhythm guitars & rhythm acoustic guitars for more options during mixing – regarding other types of tracks like solos and fills –  it’s mostly an artistic choice.

The Masters of Layering Guitar Parts

This is a highly subjective list of what I think are song great examples of famous guitar players that are masters of layering guitar parts.

Just check out how well arranged and mixed are the guitars on the Fleetwood Mac the Chains. Lindsey Buckingham is one of the most underrated guitarists in history in my opinion.

Well, what can I say? It’s no surprise that David Gilmour is one of the best minds when it comes to layering guitar tracks. Attaching here is a not very much-known song from their album the division bell written by Richer Wright.

The way the guitar fills enters the song is a textbook lesson on how to do it!

Well, you might not know him – but he is one of the top Nashville studio players now sharing his wisdom and Infinite coolness with a love for rolling rocks in his Homeskoolin YouTube Series. You can find his work in thousands of records

To sum it up hear and read the more you can then mess stuff up until you figure out the right way!

Hope you liked the article and that it helped you out in any way! If you did enjoy it and want to check out my playing – check out my Instagram account.

And if you won’t need some guitar tracks recorded and layered for your track CONTACT ME and we will get it done!

The ending of this year has been amazing for my #s

A Free solution for all #guitarplayers in need of

” A song is a spectrum of frequencies – the jo

Another original track #loop with a punny name "af

A snippet #loop of my new track #whispers and my n

The #guitarsolo bit from the bard song - up on YT


Error: API requests are being delayed for this account. New posts will not be retrieved.